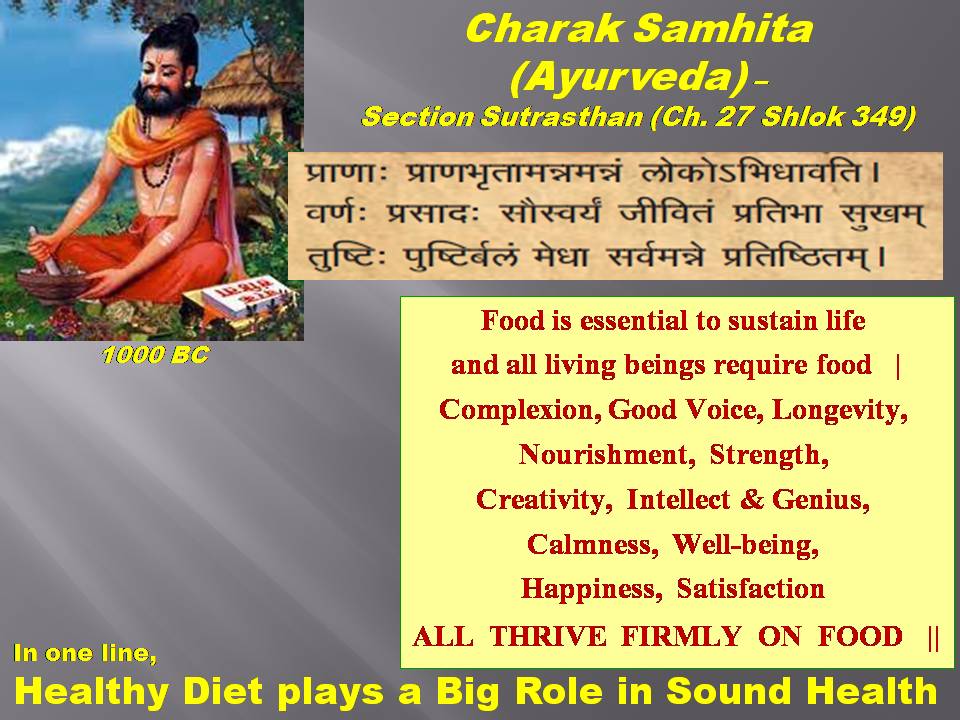 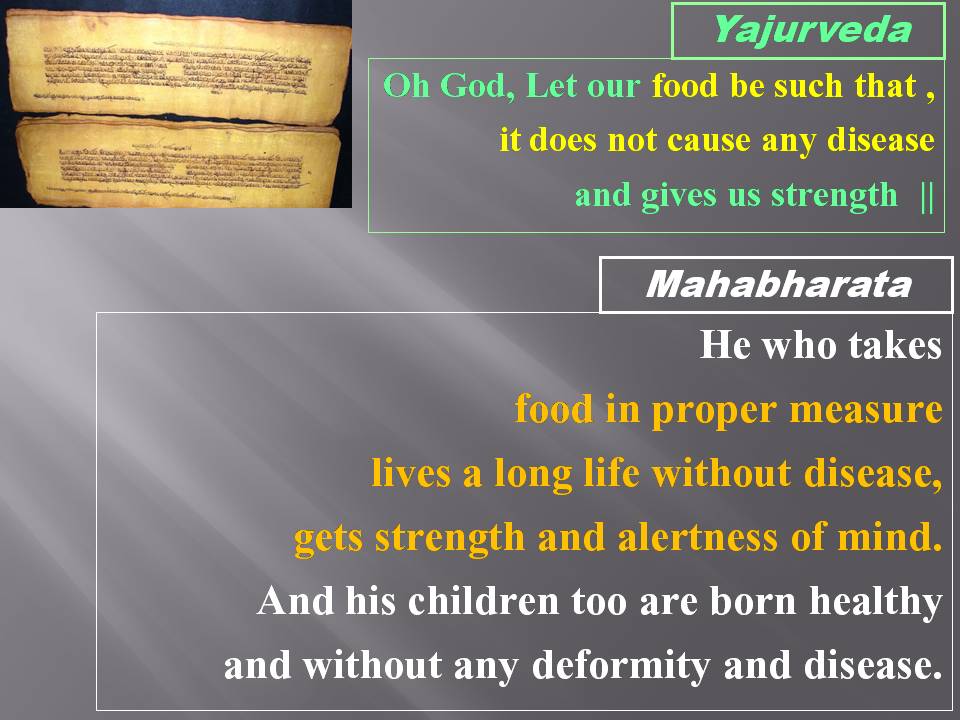 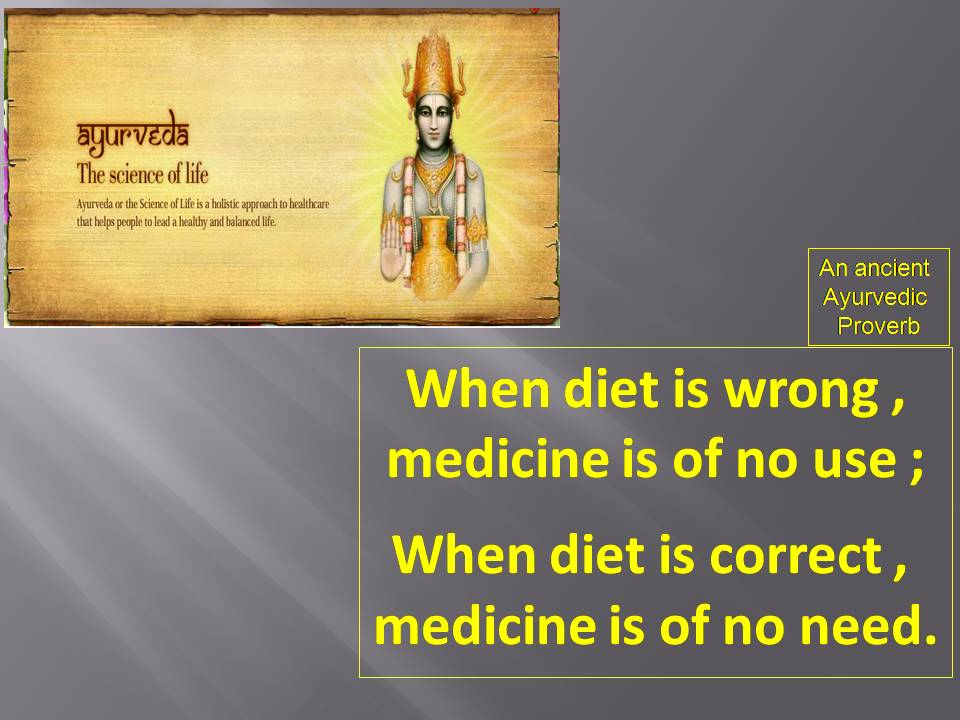 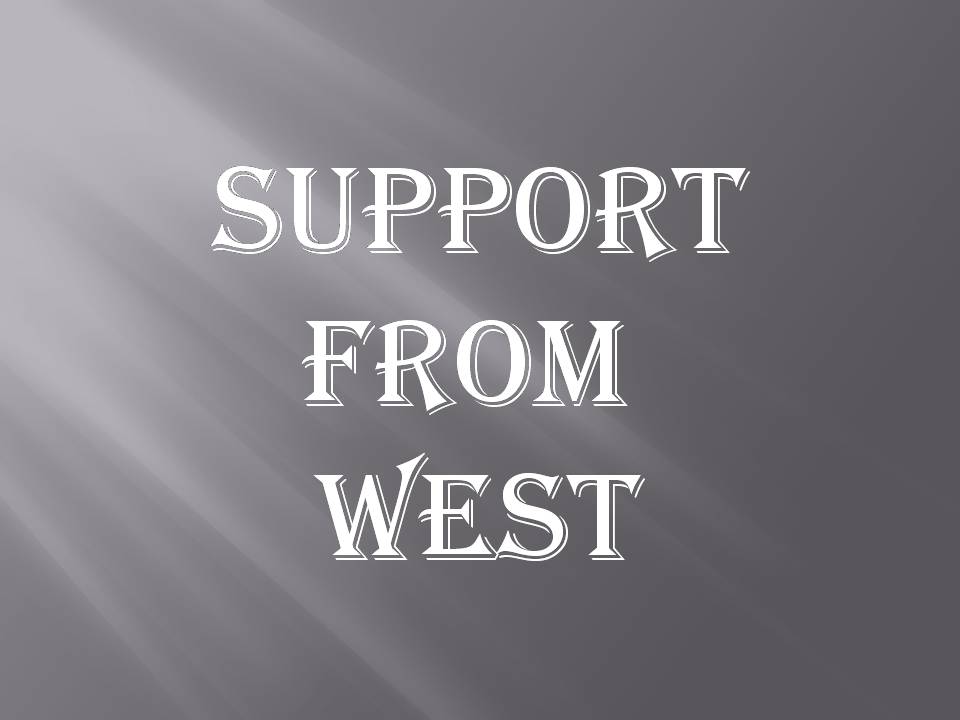 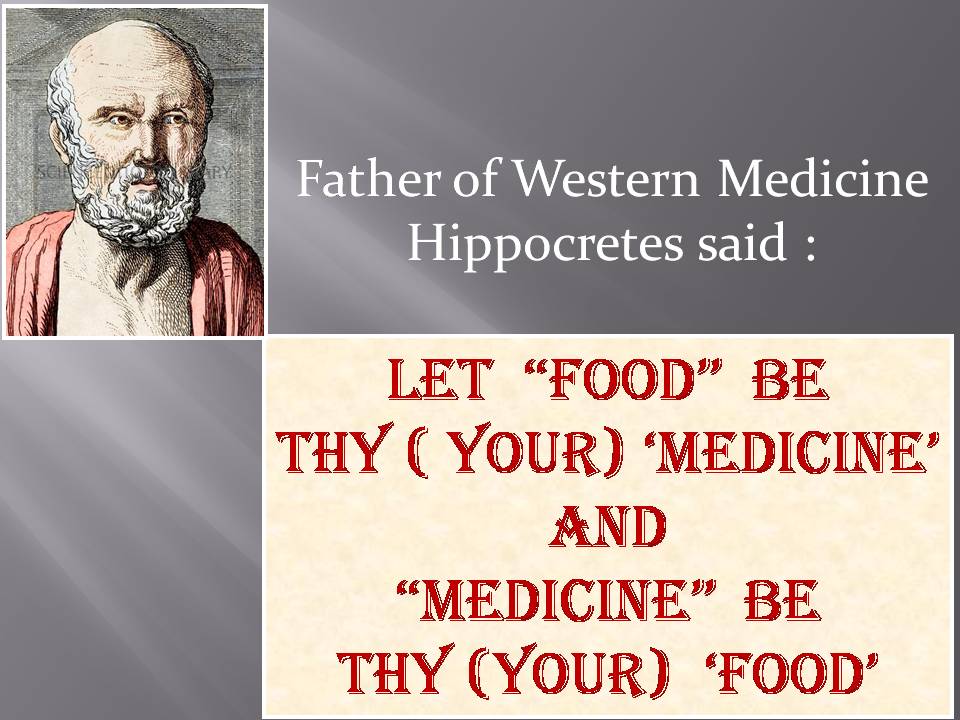 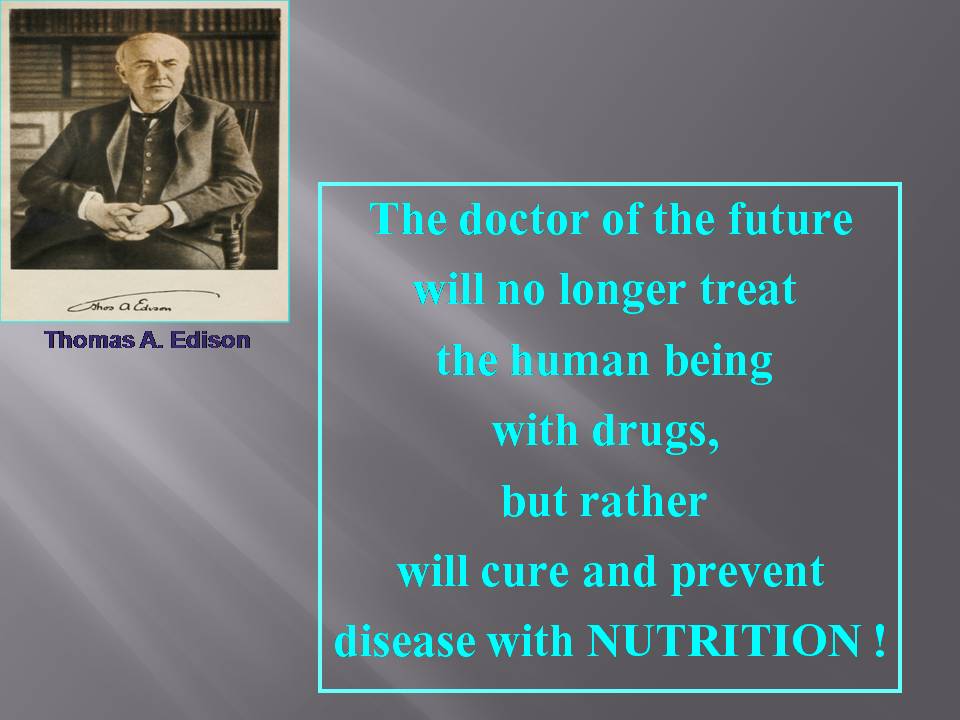 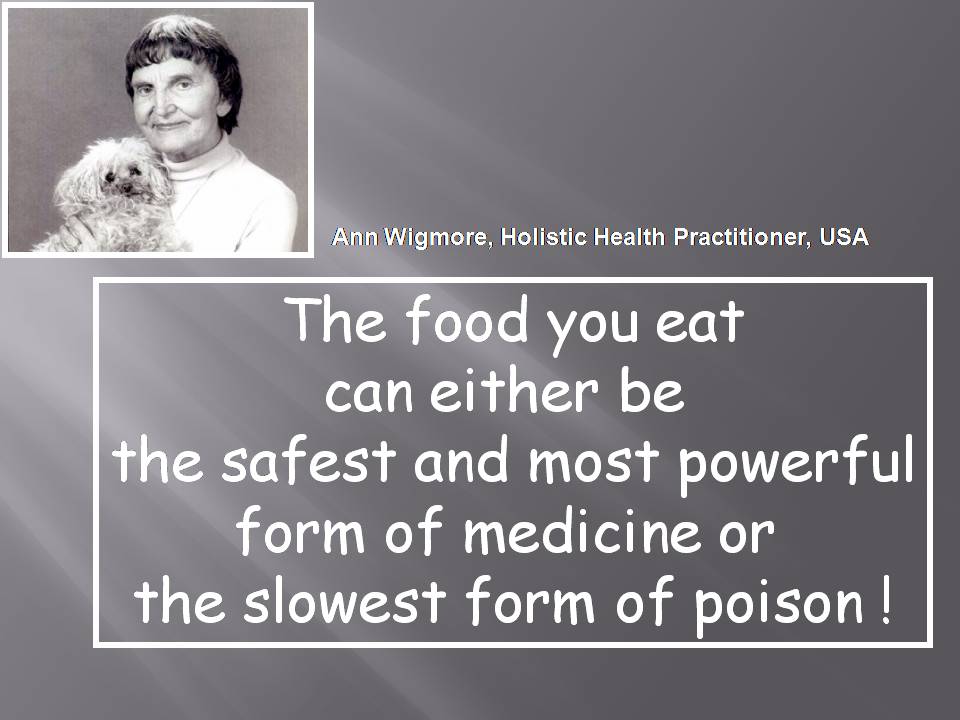 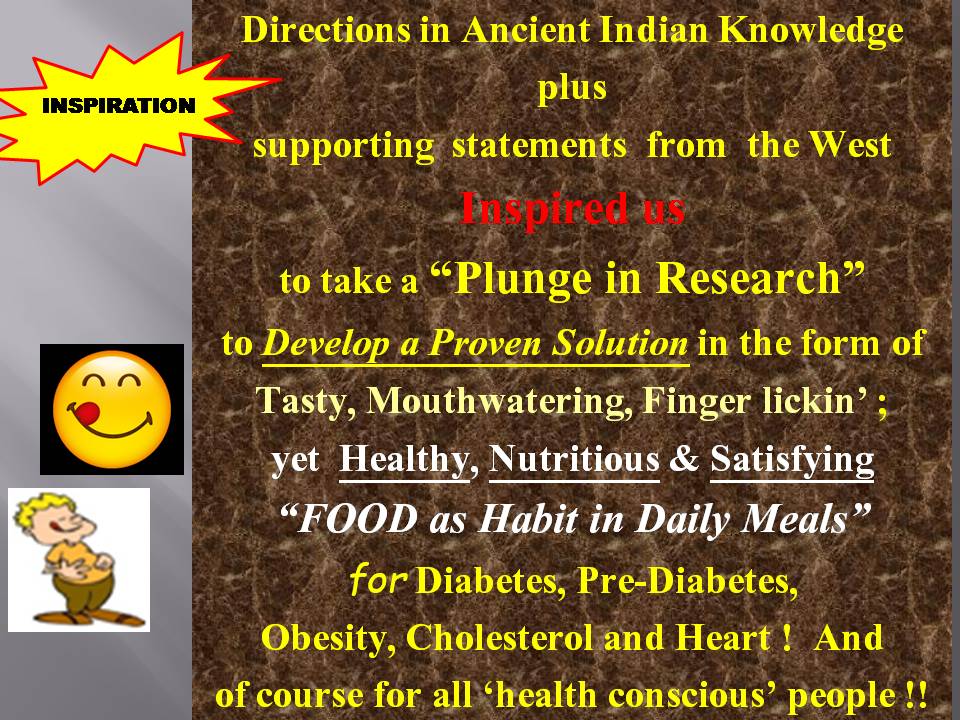 We draw our inspiration from the rich heritage and wealth of knowledge in Ayurveda. Eminent western scientists and medicos have further reinforced it through their parallel teachings. And lastly, the points of our inspiration are

The adjoining 10 slides Presentation of about one & half minutes provides you a glimpse of our inspiration source for launching this initiative to help society reverse the oncoming diabetes / high sugar / obesity / heart diseases epidemic !

Here, we bring to table as to why and how the need for developing these products and taking this initiative was felt & fulfilled. In short, the genesis of the purpose is elaborated here.

Some alarming statistics and points from World Health Organisation (WHO) report :

Because, high blood sugar is like a SILENT TERRORIST. You CAN NOT DO A SURGICAL STRIKE of this SILENT TERROR ! It has to be dealt with by GANDHIAN WAY only.

Since Obesity, Cholesterol, Pre-Diabetes, Diabetes, Cardiovascular Diseases are all known to be correlated & inter-connected to one another, steps to either prevent them or manage them with long term dietary and life style changes is the key to avoid future chronic complications.

Dietary changes for Diabetes Management have given rise to Medical Nutrition Therapy (MNT), which is proclaimed, now, by institutions like American Diabetes Association and American Association of Clinical Endocrinologists through Clinical Practice Guidelines from 2011 onwards.

One of the things the food therapy (MNT) is supposed to achieve is blood glucose control also called as glycemic control, which requires one to eat LOW GI foods as a daily meal habit.

But blood sugar control alone can not improve diabetic condition. Our ancient science Ayurveda defines diabetes in terms of “Prameha” and clearly spells out the patho-physiology of obesity, pre-diabetes, diabetes and complications with their treatment in which food therapy is essentially recommended.

Moreover, human being is a slave of good, mouthwatering, delicious tastes. He will not sustain  food habits, which are healthy, but do not satisfy taste, variety, existing practices, flexibility as per traditional cooking etc. And this is more true for an Indian, who happens to be more fussy about the food tastes and styles. Therefore, designing and developing sustainable food items, which can form a Healthy Habit in Daily Meals was identified as a major need of the above mentioned 270 million target people !! If diabetes epidemic coming in India is to be reversed, this is what is needed badly.

The research and development project with perspective as above was undertaken by Dr. Jyoti Shirodkar ( M.D. , Ph.D. in Ayurveda) from 2009 to 2014, wherein all this knowledge above along with wisdom of Ayurveda was applied to experiment vigorously various combinations and develop a process and product formulation which will help address the need of appropriate healthy food as a healthy habit in daily meals for the 270 million target people of India to begin with. And that is the Genesis of our Inspiration.